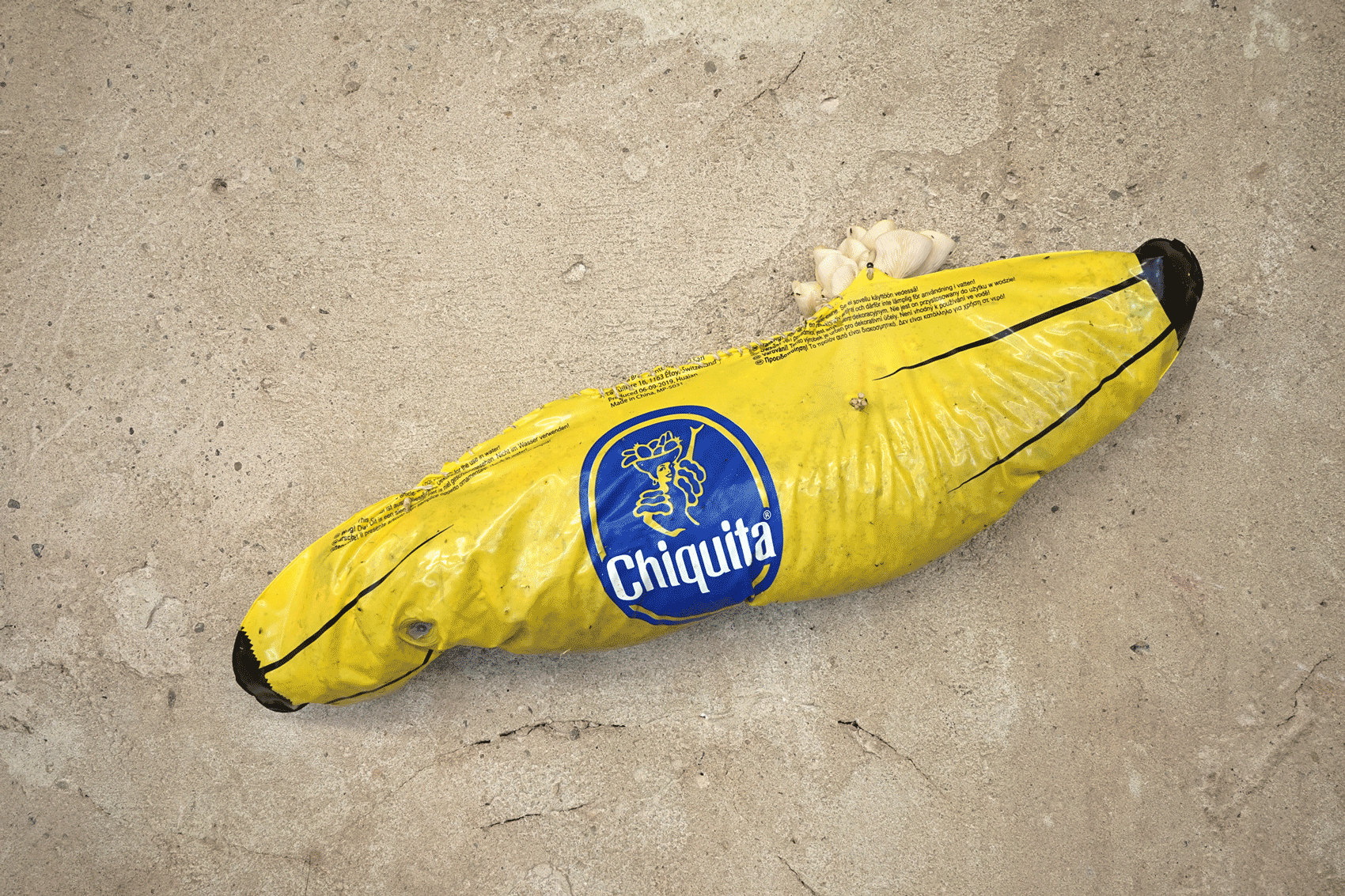 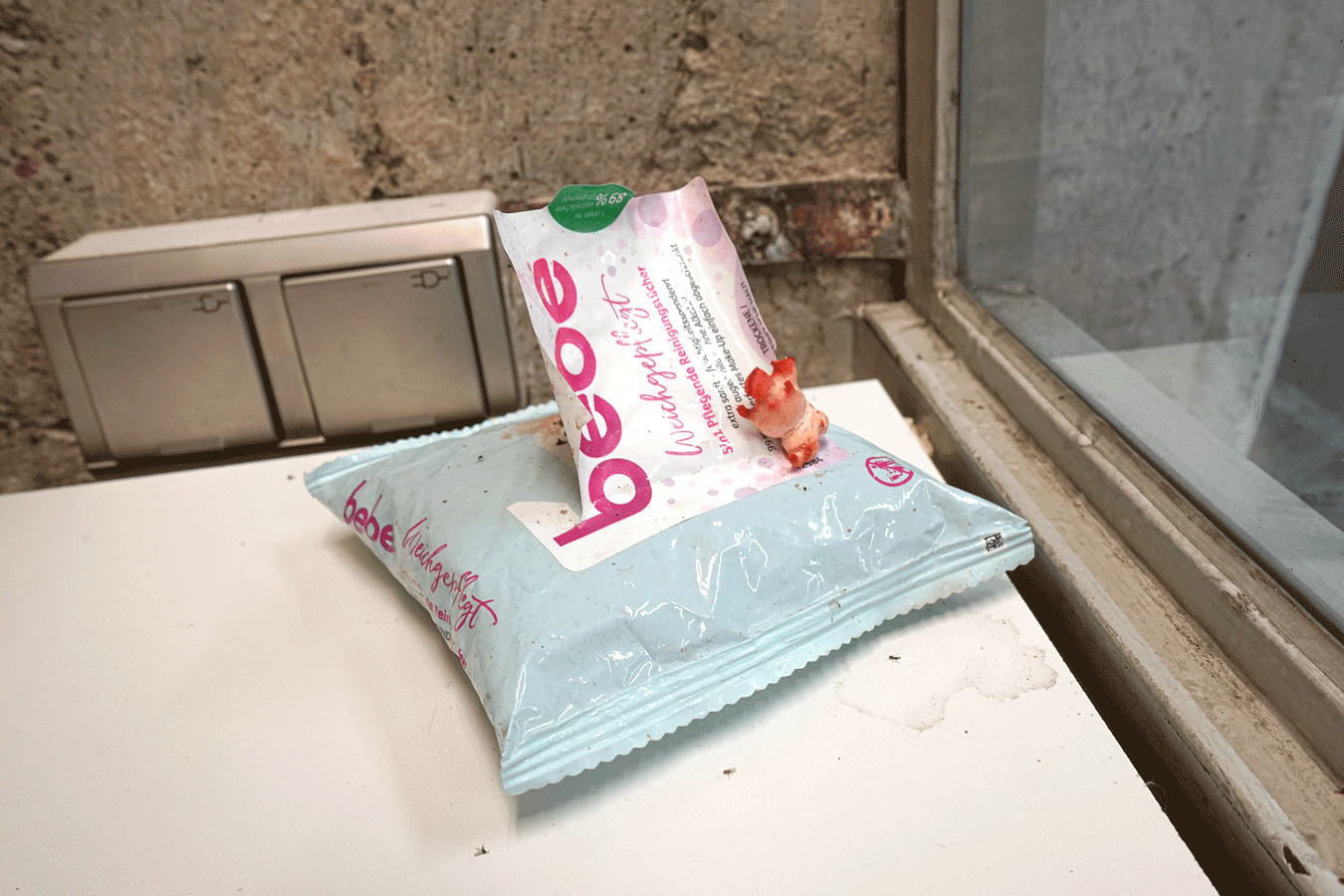 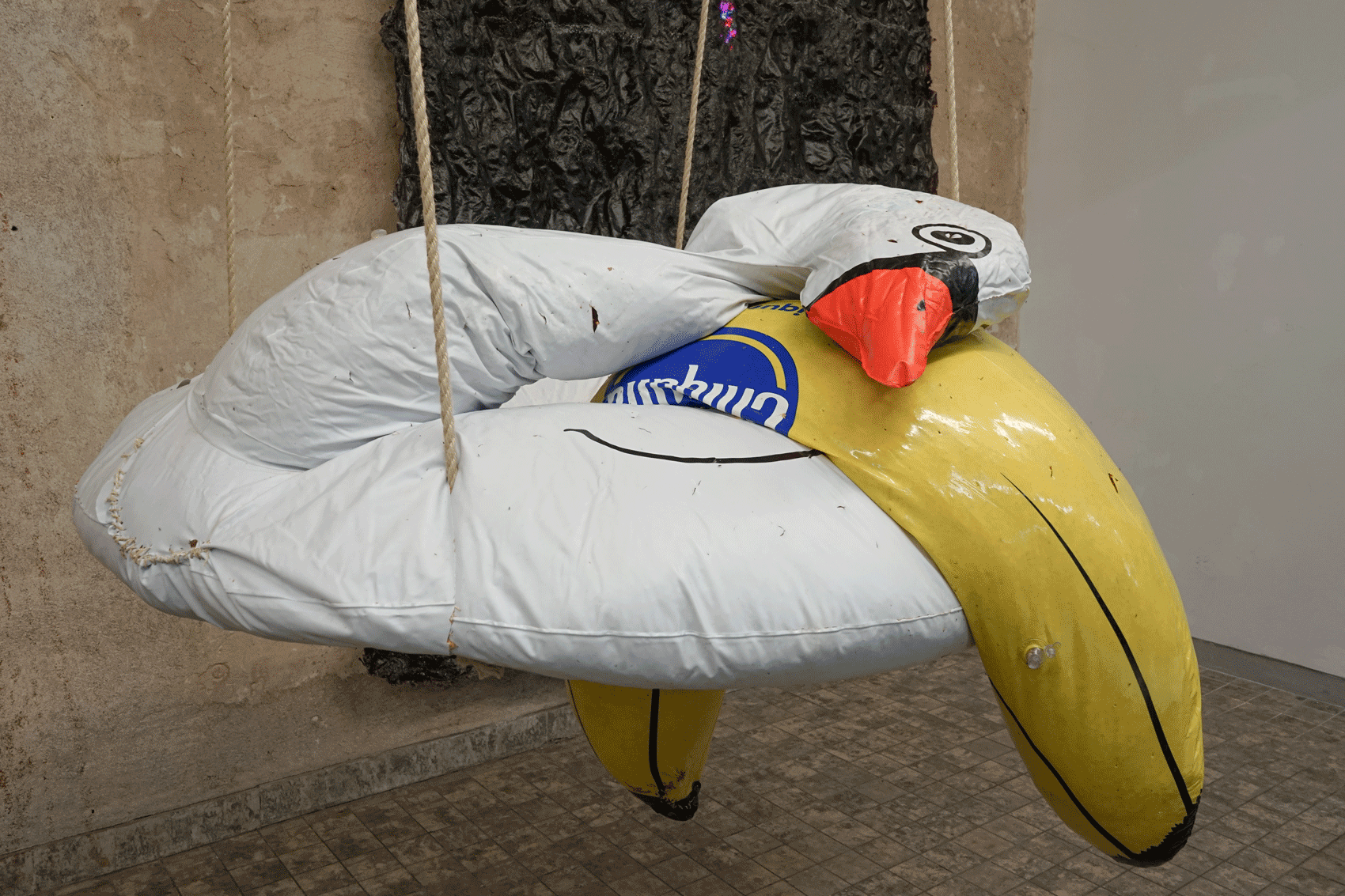 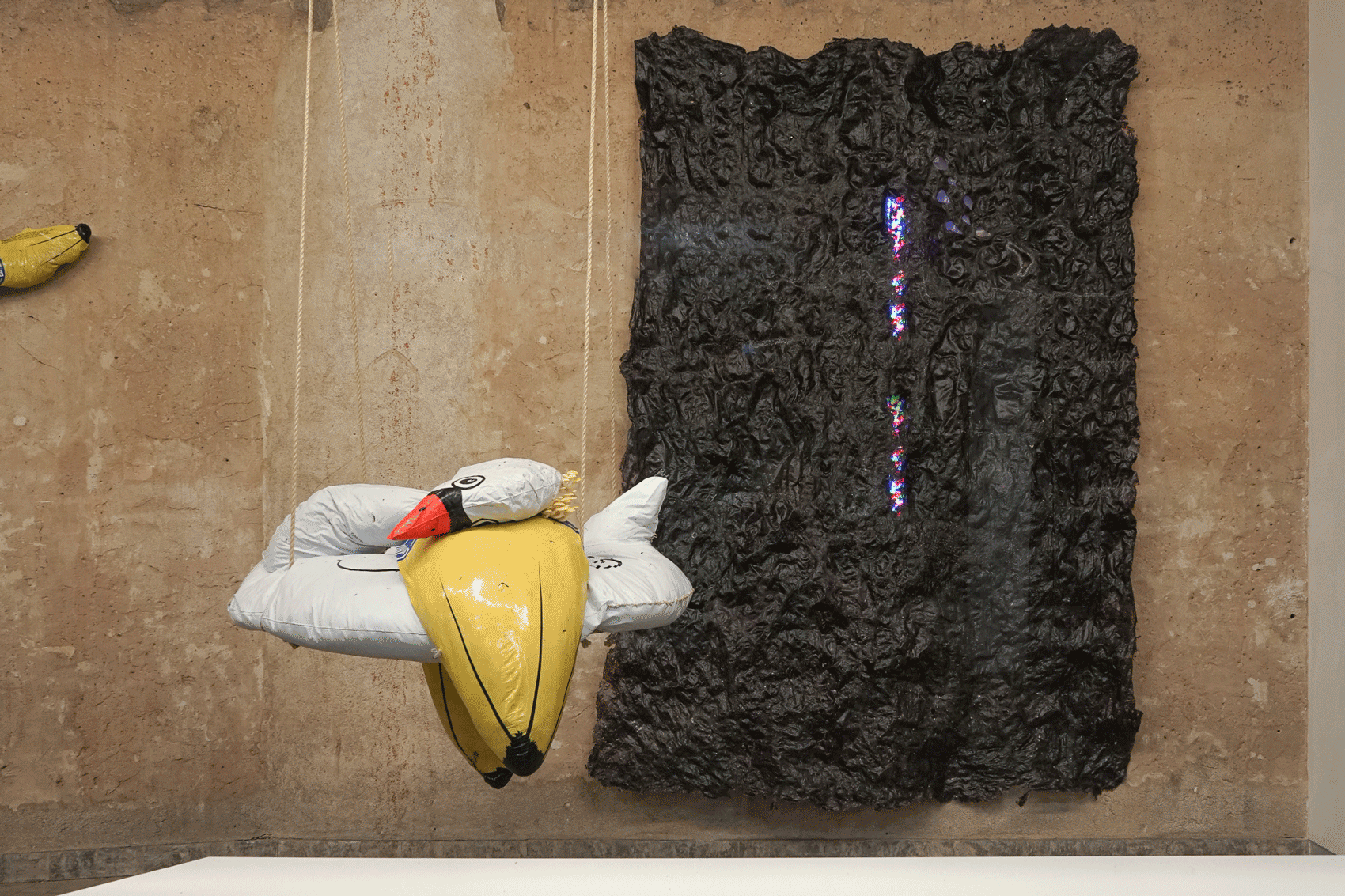 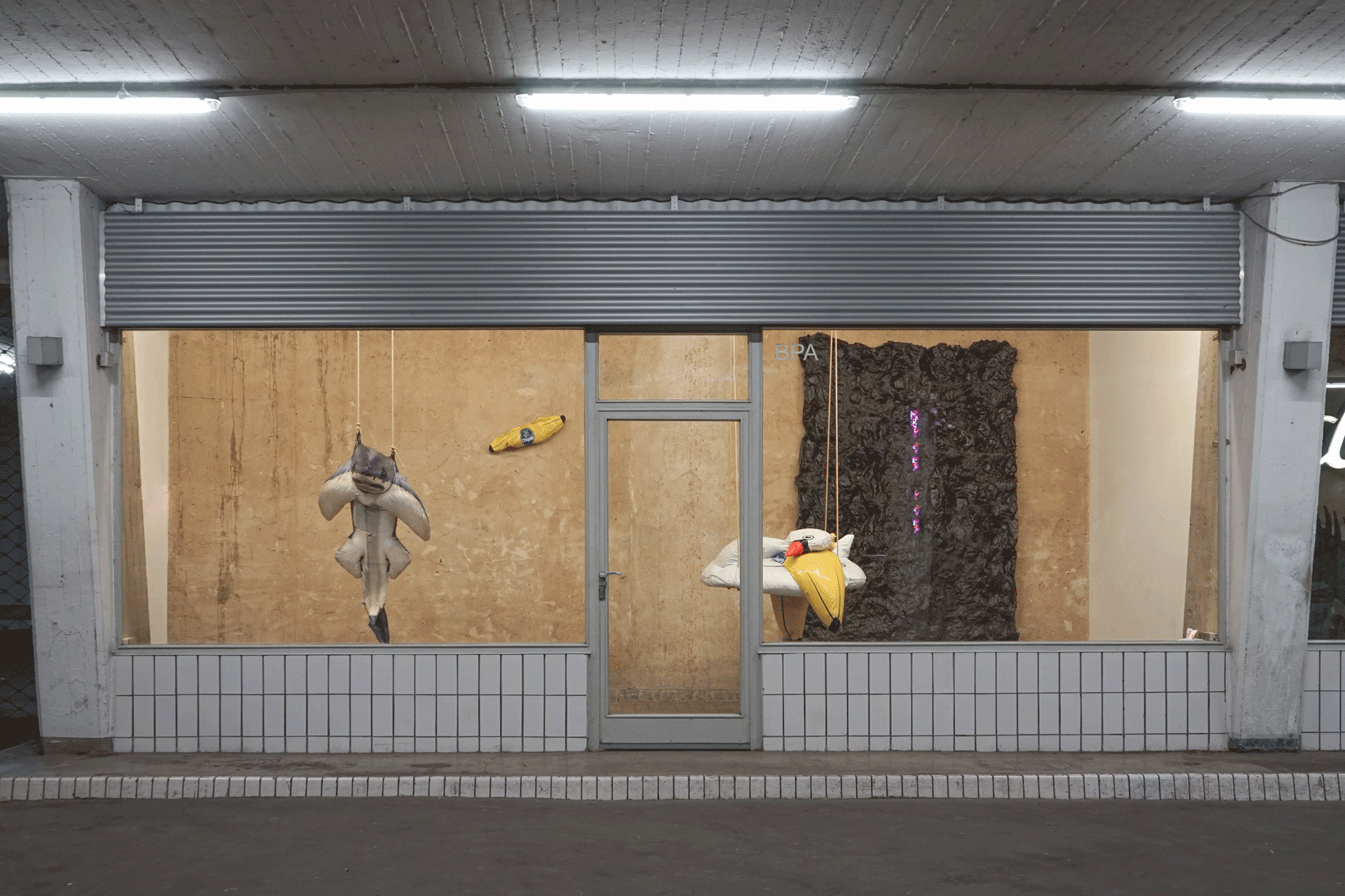 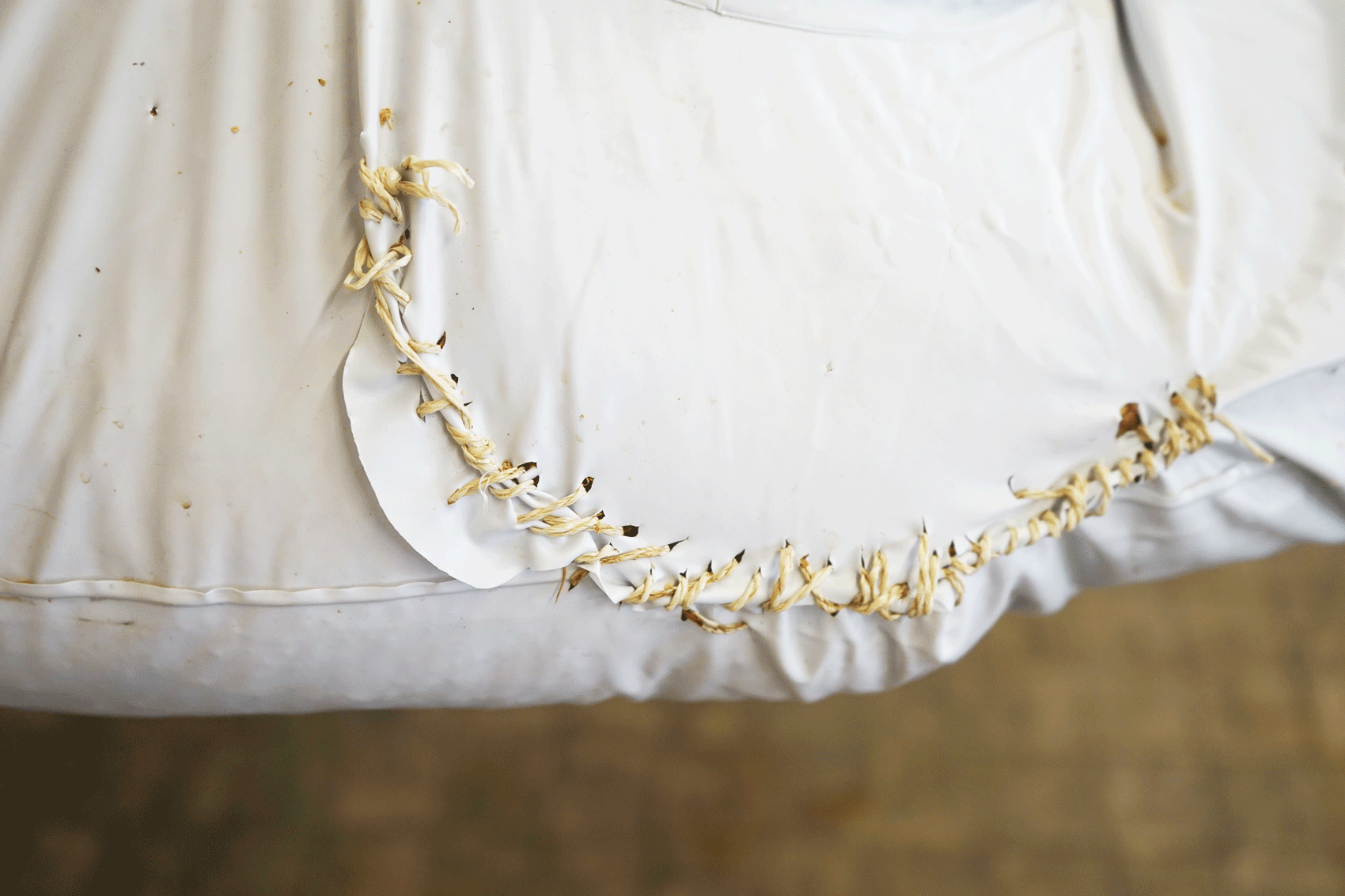 Working as a merchandising display, the window showcases farming of live mushrooms, which could possibly be fed to the community.
They’re growing by consuming the plastic structure of the toys which are here symbolizing the contemporary art world.

It is summer. The heat radiates from the asphalt of the Belgian Quarter, and sweat trickles down your body as you peer through the windows of the BPA space in Cologne. Meanwhile, the rubber soles of your shoes threaten to melt into the ground, and the inflatable pool toys behind the glass remind you where you would rather be right now. Like a faded childhood memory of hot days by the water, Yaël Kempf's latest exhibition reminds us of the transience of time that mercilessly fleets away.
Three inflatable swimming toys collapse in on themselves as if they are tired of their existence. A large white plastic swan exhaustedly lays its head to one side and tries to support the weight of a ridiculously oversized Chiquita banana. Meanwhile, a pathetic-looking plastic shark floats in space as if to prove one last time its non-existing vitality. Their ironically heavy bodies are attached to ropes that lift them into the air, feigning a perfidious kind of liveliness while trying to pitifully mask their artificiality. The hanging on the wall adds more layers to these reflections as it attempts to drown the fluorescent light like black tar. It is made entirely of nori leaves, which are considered to be organic. However, the seaweed is processed and cut into squares by machines in a highly industrialized and standardized way which alienates the final product from the original algae immensely.
What will only become visible in the course of the exhibition is that the plastic sculptures are merely vessels, for their insides are filled with a special kind of sporulated soil. Over time, fungi will begin to sprout towards the surface and emerge as mushrooms in alienesque shapes and forms from inside their hosts. They are highly sophisticated organisms that are interconnected through intricate mycelial networks. Because of their extensive adaptability, fungi tend to lurk in dark, damp places since they do not photosynthesize and consequently are not dependent on sunlight. Therefore, like animals, they must feed by ingesting organic substances which they absorb from their environment.
While mushrooms are included in most cuisines, they are also known for their poisonous characteristics. At first glance, the fungi in Yaël Kempf’s installation resemble parasites that infest their plastic hosts leading to their slow demise. This is only one of a multitude of cultural associations. When looking at the inflatable swan with its head so heavy that it cannot stand upright, the lyrics from Jefferson Airplane’s song White Rabbit may come to mind which pays tribute to the drug-fuelled counterculture of the 1960s: ”And you've just had some kind of mushroom / and your mind is moving low“.
Within this struggle of the artificial, the fungus emerges as the only living organism in the entire installation. Moreover, its existence is inherently intertwined with the spontaneous and unexpected as it is not just a passive artistic resource, like the inflatable pool toys or the nori leaves, but an active collaborator. In the process, a fragile and laborious relationship develops because the whole idea behind the work depends on the cooperation between the artist and the fungal organism. Its success is never certain and the decay of the collaborator is always possible. While pondering the growth of the fungi and looking at the inflatable pool toys, which have been given a new sense of use, Yaël Kempf’s reflections on the continuous cycles of becoming and dying are revealed. As you stand here waiting for a mushroom to appear, the passing of time is tangibly brought into the exhibition space.
Alica Sänger

Special thanks to BPA