Passionate with romanticism, Yaël Kempf decides, today, to invest her formal work on wood as a symbol of the youth in search of free love and revolutions. The dialogue pulled by Zabriskie Point, by Michelangelo Antonioni, who welcomes us next to the front door of Stocq 72, calls us to live the present moment with passion, without doubts or questions. First of all, the pieces of wood of Yaël Kempf are an exploration of the material and a work of abstract compositions, using every type of collected wood as they are. It’s her fascination for the material that dictates her gestures. The genesis of the presented work is found in a small showroom plunged in the dark, which we penetrate secondly. We see a lantern there. It is realized with chipboard OSB, a material often used for constructions on dockyards. On these plates, made by the accumulation of wood fibbers, Yaël Kempf had covered part of the surface with paint, in order to let emerge only the forms which outline follow the drawing of the fibers. Then she reproduced these encircled parts, enlarging them, in another industrial wood. The works of wood presented in the other room are reproductions of these autonomous forms, as a result of a process of perpetual reinvestment of the produced forms. When Yaël Kempf discovers the site, she is seduced by the raw aspect of walls, marked by the many layers of time, and by the narrow cohabitation of the exhibition space and the domestic living space. She sees a context in which she can make her pieces of wood live. In a general way, the staging of her research is recurring. It’s a question of revealing an inside, a wall, a stool ... in order to create a potential place made of raw materials. A dialogue is then put in place with the atmosphere of the construction site. The reference to Michelangelo Antonioni's movie, Zabriskie Point, is latent. Firstly with the sound resulting from a Walkman embedded in the wall spreads the soundtrack of the movie. The last scene of the explosion in which all the objects symbolizing the consumer society (among them, a flying chicken slowed down) are sprayed in the air, is one of the starting points of this exhibition. Just like this explosion, the feeling of the surplus is underlined in the proposal of Yaël Kempf. With material such as the chipboard OSB, a summary of wood fibbers, she extracts uncluttered forms. Then, in an attempt of erasing the action, her work marries a new surface, becoming integrated into the set, as if its place was completely natural and explainable. The pieces of wood are melted into walls. Like chameleons, these wooden sparkles are maybe the witnessing of a vain explosion, which has been dissolved in the setting, forgotten. In parallel with the explosion and its energy scattered in profusion, a self-sufficient system is set up. This time, the energy is mastered and contained: a red bulb wants to persuade us that it draws its light from multiple sockets connected to itself. In the following room, it seems that a new explosion is preparing. From a darkened fireball, we only perceive shadows thrown on walls. 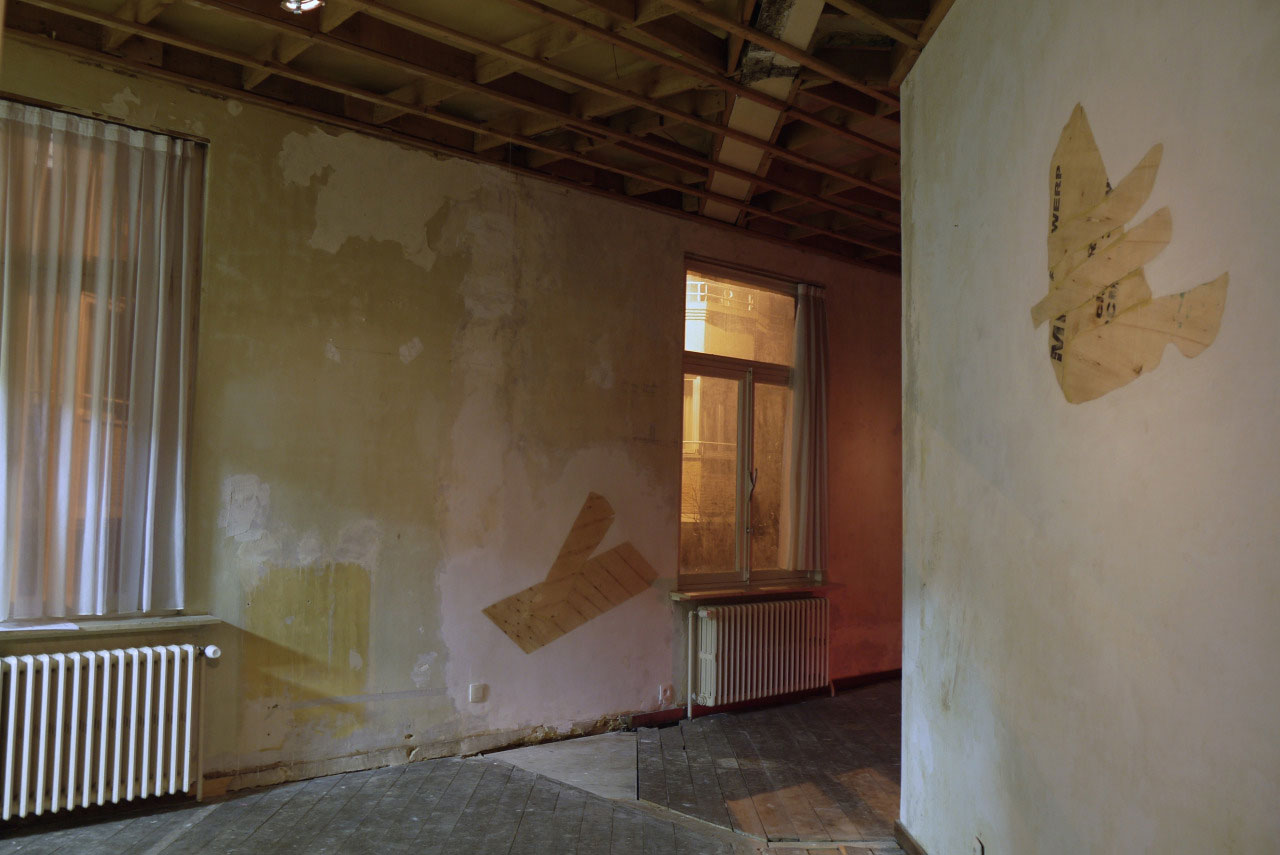 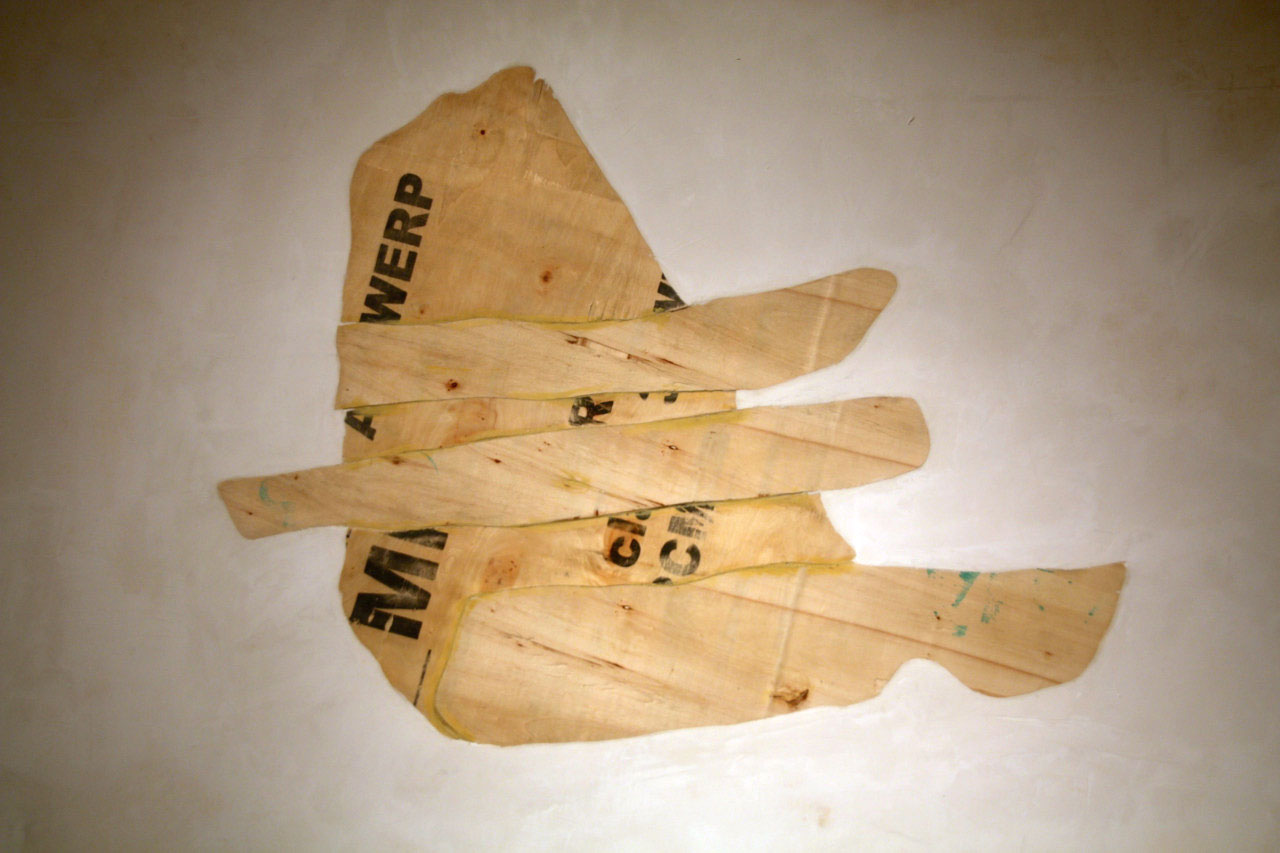 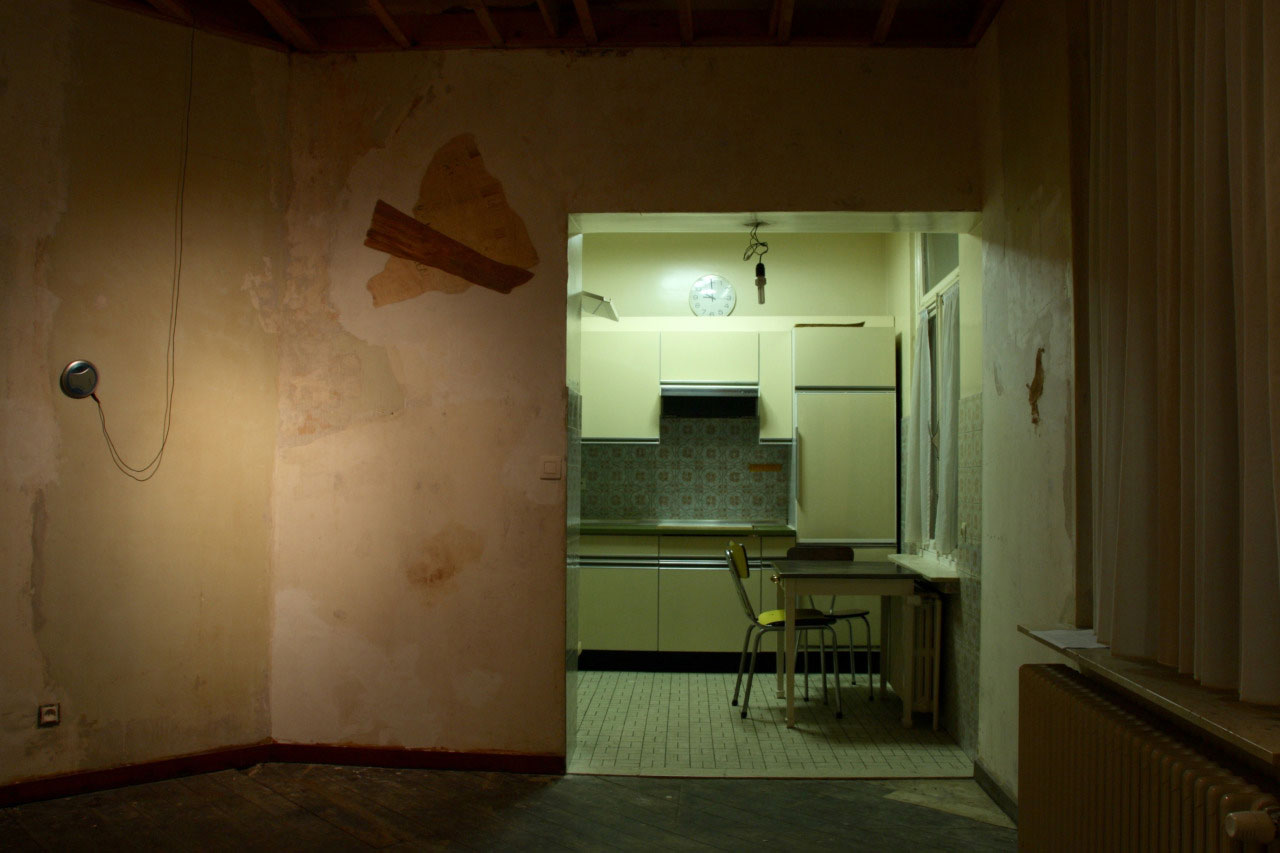 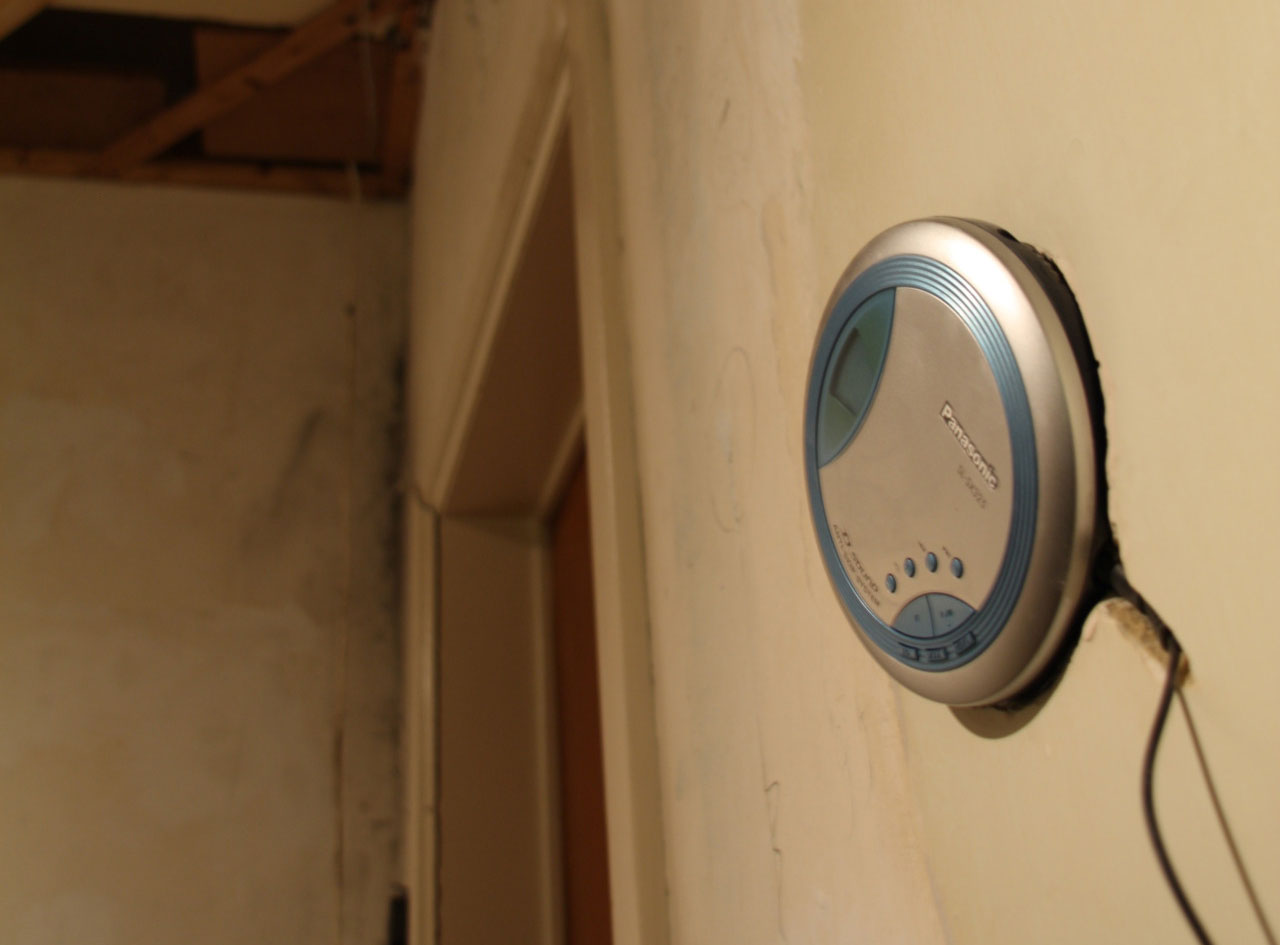 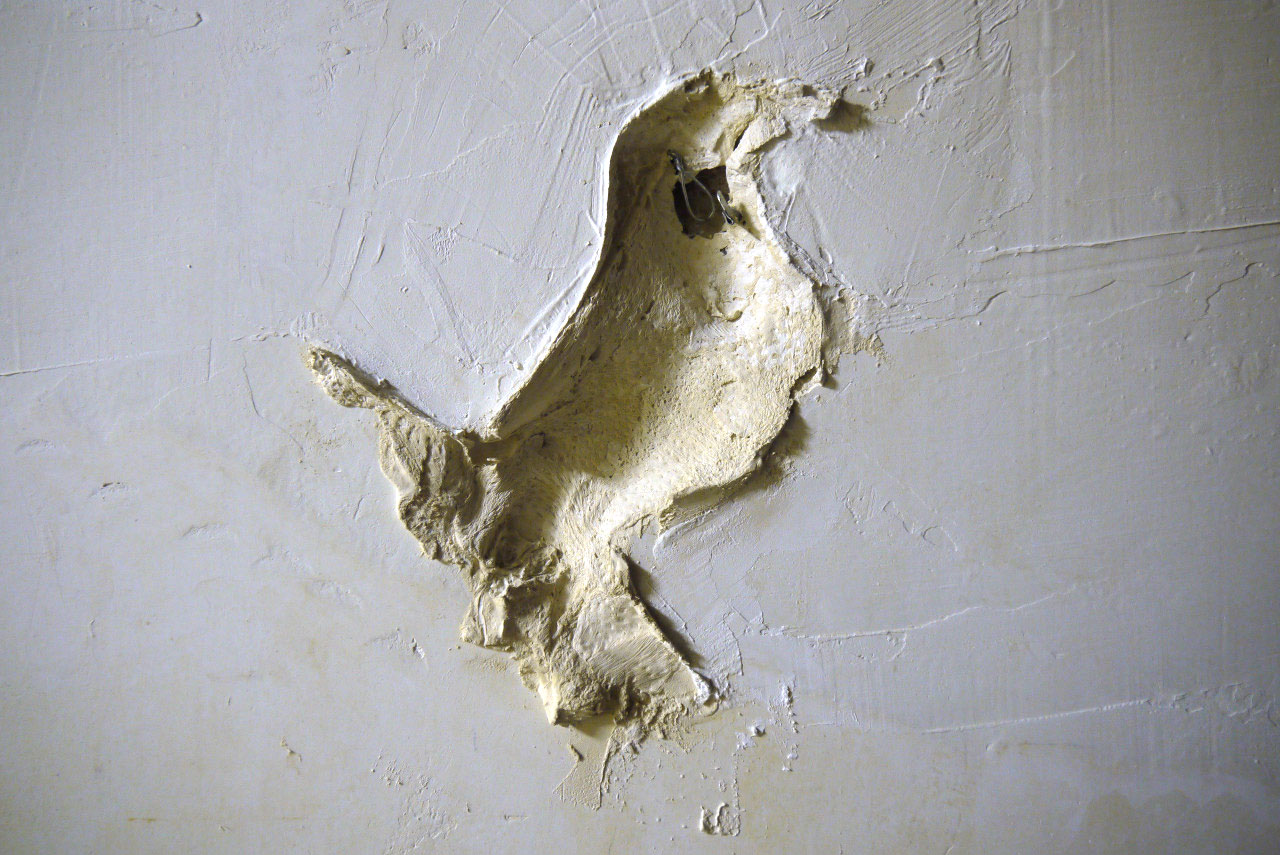 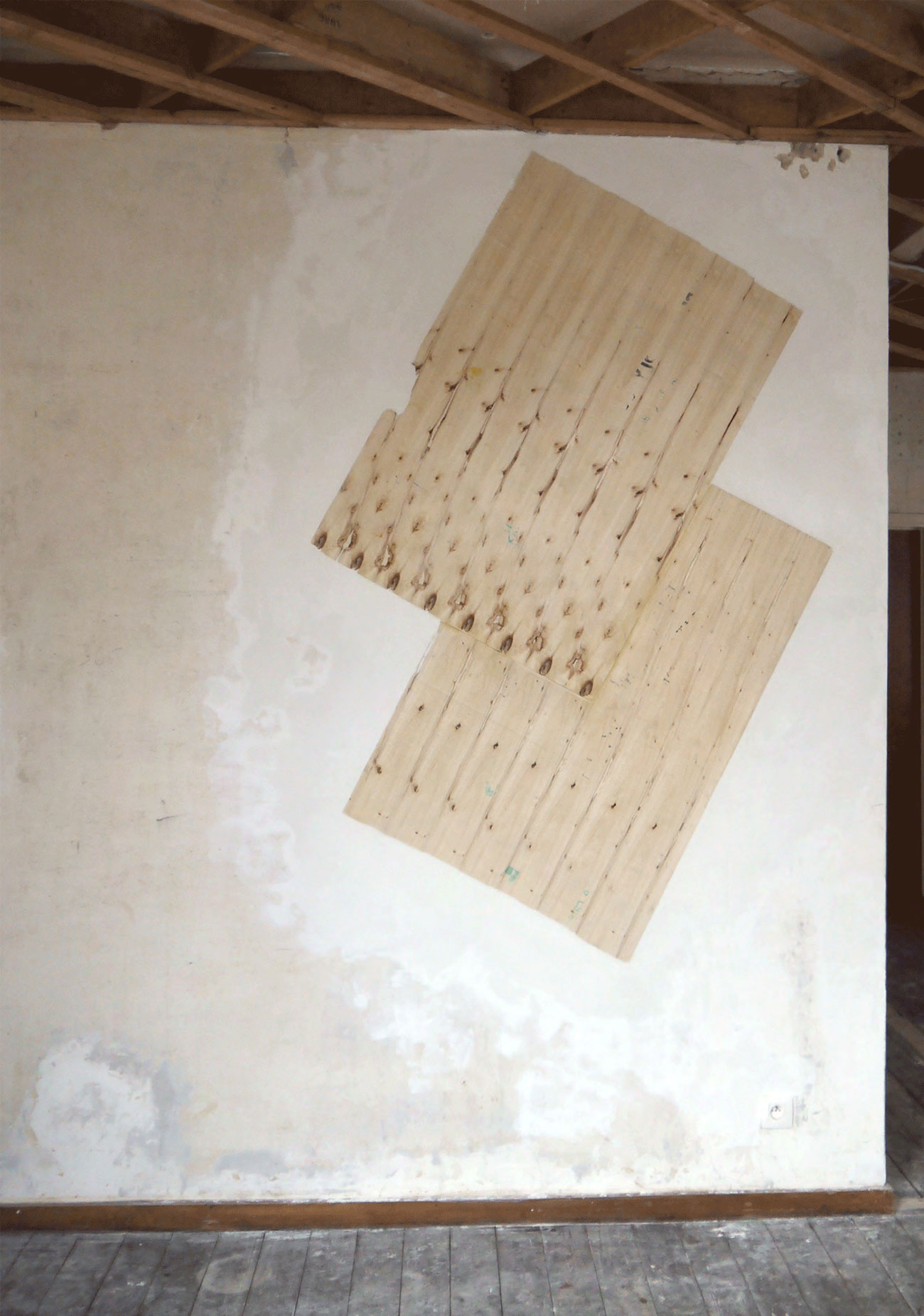